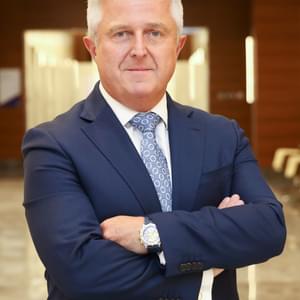 Simon joined First Abu Dhabi Bank in January 2018 and brings with him over 25yrs of market experience. Over his career as an economist, Simon has built up a wealth of multi-asset, global macroeconomic investment strategy knowledge, working in both London and New York. Simon worked previously for BNP Paribas, RBC and National Australia Bank in London, and for Bear Stearns in London and New York.

Bi-lingual in French, his primary focus as Chief Economist at First Abu Dhabi Bank is on global (G10 / MENA / GCC) macroeconomic issues, covering rates, FX , credit and commodities and in particular how these are relevant to investment strategies within the MENA/GCC region.

Simon’s views are regularly requested by the major financial news channels and the written press. Simon is a regular guest host on Bloomberg television and radio as well as CNBC television. In addition, he has often been quoted in the Financial Times and other leading financial publications.