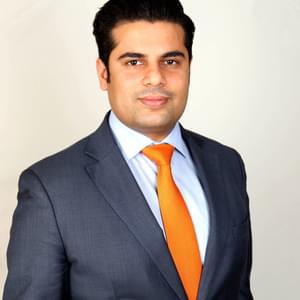 Fawad heads the investment banking at SHUAA Capital psc and is responsible for its advisory, capital markets and credit business lines.

Fawad also serves on the Board of Directors of Northacre-London, the Khaleeji Commercial Bank, and NCM a global FX and commodities platform.

Fawad joined ADFG pre the merger in 2014, initially heading up its debt platform and subsequently focused on devising and implementing alternative investment strategies across multiple asset classes. In 2017 and following ADFG acquisition of c. 49% of SHUAA, Fawad served as Managing Director and then CEO of SHUAA Capital until the merger with ADFG in August 2019.

Fawad started his career with Deloitte based out of London before joining the Dubai office where he helped set up its Middle East debt advisory practice. He has executed high profile M&A and debt transactions on behalf of major international institutions across Europe, Asia and the Middle East region.

He holds an MSc in Business Studies from UCD Smurfit Business School and a BSc in Computer Science from University College Cork. Fawad also served with the Irish Reserve Defence Forces in the military police.