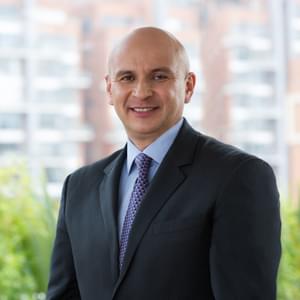 Brigard Urrutia's partner since 1996, with more than 25 years of experience. Mr. Fradique- Méndez advises leading local and foreign companies in the areas of Capital Markets, Banking and Finance, Foreign Exchange, Derivatives and Structured Finance, Customs and Foreign Trade and Tax. Among his most prominent transactions is the advice to Carvajal S.A. in connection with the issuance of bonds at a price of COP$400 billions; advice to Pacific Rubiales, first foreign private issuer, in the registration of their stocks at the Colombian Stock Market and at the RNVE; legal assessment to Bank of America, Merrill Lynch y JP Morgan Securities (first buyers) in a bond offering under Rule144A/Reg S of Empresas Públicas de Medellín (USD500M), among others.

Recognized as 'Highly Recommended Lawyer' by PLC Which Lawyer? In 2007, Latin Lawyer chose him as one of the 40 best lawyers under the age of 40 in Latin America. This latter publication also mentioned him as being one of the 23 best lawyers in the Capital Markets field. Mr. Fradique- Méndez was recognized in Banking & Finance: Capital Markets by Chambers & Partners Latin America- 2012 and recommended in Project Finance and Real Estate by Who's Who Legal-2011.